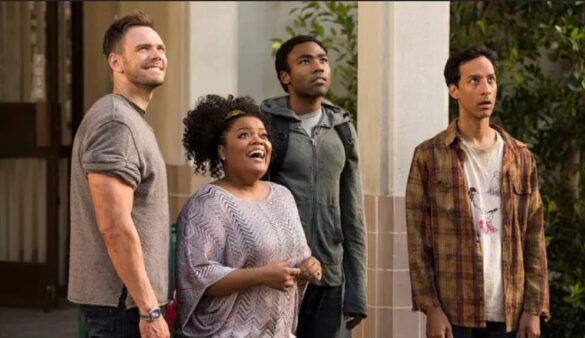 Fans of “Community,” hold tight: Donald Glover and other cast members may show up in the forthcoming Peacock movie. Dan Harmon, the show’s creator, explained why two important “Community” performers, Glover and Yvette Nicole Brown, were absent from the announcement of the show’s greenlight last week.

Joel McHale, Danny Pudi, Alison Brie, Gillian Jacobs, Jim Rash, and Ken Jeong were the initial headliners of the movie when Peacock and Sony Pictures TV announced its development, but Harmon tells Variety that other actors might yet show up.

“I think that Donald is coming, based on word of mouth, but it’s just the deal isn’t official or wasn’t official. It would be difficult to really commit to doing this thing without Donald,” Harmon said. “So I believe he is coming back. I think if there’s names missing from a list, it’s because the names that are on the list, their deals are agreed upon enough that it’s OK to say they are on the list, and anybody that’s not on a list, it’s just not the case yet. So there is nothing official about anybody being out.”

Brown has been gushing over the “Community” movie on her social media pages, which may be a sign that she’s involved, but she hasn’t talked about it. Additionally, Glover said that he would be open to a “Community” movie if one were to be made during a 2020 reunion panel.

Following a panel for his upcoming Fox animated sitcom “Krapopolis,” the “Community” creator—who is also co-creator of another fan favorite, “Rick & Morty”—met with Variety at New York Comic Con on Friday. (During that discussion, Harmon addressed the prospect of Chevy Chase returning for the film; Chase’s character, Pierce, was killed off in Season 5 of “Community” due to behind-the-scenes disputes. Harmon said: “I don’t even know whether it’s legal for him to come back. It might not be in my control. I might have to agree to anything with an insurance provider.

Harmon can now stop fielding inquiries about a “Community” movie as of last week, when it was given the all-clear. But now he has a lot of fresh inquiries: Who will be in it, and who won’t? Who will helm the movie? How did Peacock win the battle of the bids for Greendale Community College?

But Harmon knows the solutions to the questions that remain. In addition to the cast mystery, we do know that Andrew Guest, a former “Community” cast member, assisted Harmon in writing the screenplay. But who is in charge of filming?

“There’s a director that directed some of my favorite episodes of ‘Community’ that it would be great to see be able to do the movie,” Harmon said. (Among names that have been rumored in the past: Previous “Community” directors like Justin Lin and Anthony and Joe Russo.) “And that’s not even mentioning the Russo Brothers, who I would also love to see come back. But I’m just making the assumption that they’re too busy.