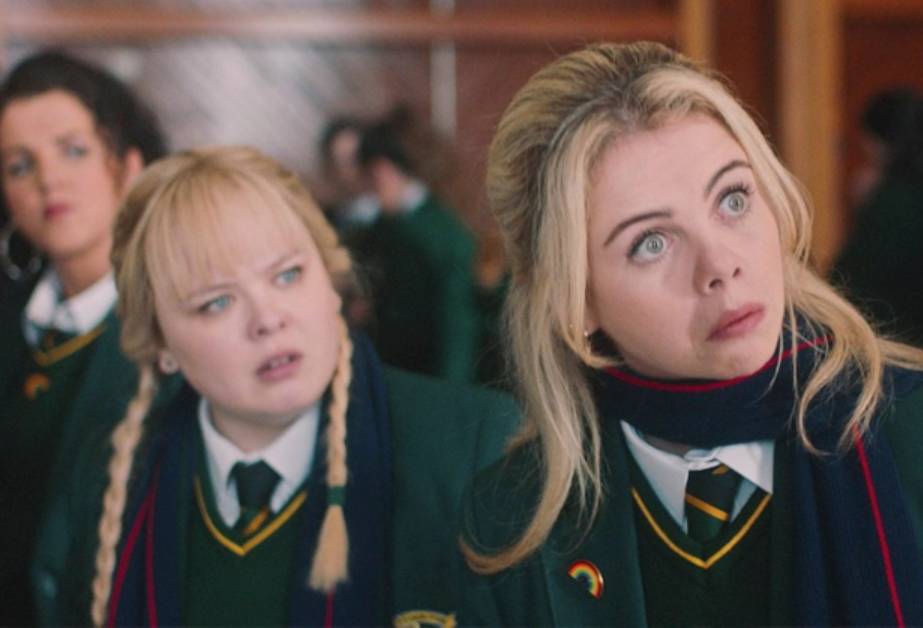 On the show Derry Girls, no one would ever exclaim “We’re going down the beach!” while referring to their day excursion to an amusement park located by the water. But I, a South Jersey native who has spent my whole life here, am in control of this review, and that is exactly what happens in this episode. If you were to judge Ma Mary’s preparations for the train ride to Portrush just by the number of sandwiches she is bringing, you might be forgiven for supposing that she is getting ready for a stay of at least seven days. The fact that Gerry subtly reminded her that the train ride wouldn’t take more than an hour had the unintended consequence of her deciding to make another ten or twelve sandwiches. The cooks in all of the world’s militaries nod their heads in approval, as did my late grandmother, who was also known as the Queen of Bring Your Own Refreshments and very obviously recycled aluminum foil.

There are some updates on the current peace process negotiations in the press while everyone waits for Mary to finish her self-imposed catering order. In order to engage in negotiations with Sinn Féin, the political arm of the IRA led by Gerry Adams, the Democratic Unionist Organization, a loyalist political party, the IRA must first disarm. In order to do a quick repiercing before they leave for the day, Sarah holds an ice cube to her earlobe and makes the theory that the IRA’s opposition to decommissioning its weapons is a result of the organization having lost those weapons. Sure, who among us hasn’t meticulously packed and stored stuff that we know will one day be useful again only to forget where we placed it six months later? Let this serve as a reminder to everyone not to perform any Swedish death cleaning prior to starting a significant endeavor.

Due to waiting for the train on the incorrect platform and having to rush to the correct one at the last minute, the Quinn family entourage just barely makes it out of town. Remember season one and their nearly disastrous attempts to leave Derry to avoid the Orangemen’s parade? They always seem to have trouble leaving. Is Derry the local version of the Hotel California, where guests can check out whenever they want but can (nearly) never actually leave? Lisa McGee will be required to either support or refute this theory. Don Henley’s opinion on this subject is likewise appreciated.

The wains prefer to sit in a different carriage than the adults after they board, though Erin’s claim that they are old enough to enjoy a little independence from constant supervision is somewhat undermined by the fact that they left Clare at the station. Clare accepts this blunder with her trademark grace and composure. Which is to say that as soon as she learns she has been left behind, she screams her little head off in panic.

Thankfully, she will only have to wait 20 minutes for the next train, but for Clare and poor Sister Michael, who is also traveling to Portrush for the day, those painful minutes pass by like molasses in January. Due to the woman working the ticket booth, who is having a lengthy and detailed talk with her soon-to-be ex-husband about the numerous specifics of her discontent with their sex life, the small awkwardness of waiting together is amplified to an 11 of second-hand mortification. Every syllable is audible to Clare and Sister Michael, and they do.

I believe Clare’s absence was mostly intended to accommodate Nicola Coughlan’s Bridgerton filming schedule. But it doesn’t matter; she and Siobhán McSweeney are delightfully awkward and funny together, and we get a good look at Sister Michael’s very sassy country and western-themed travel attire. (While sporting her customary wimple and a fringed blouse with a silver and turquoise bolo tie!) It’s much more entertaining to think about because she never offers an explanation for any of it.

Back on the train, Sarah and Mary manage to get themselves into a pickle that is remarkably similar to the kind of dilemma the waifs usually find themselves mired in, both in terms of stakes and repercussions (low) and emotional intensity (severe).

Sarah and Mary are having a very warm conversation reminiscing with a woman who recognizes them from their youth, while a fight with the petty martinet in charge of the snacks trolley leaves the wains in a situation with a very suspicious backpack (contents: £1,000, a balaclava, a handgun, and a small bag of potato chips). They don’t know who she is, but since she’s about to get off at the next stop, there’s no big deal. The train then abruptly stops, leaving each person stranded with their unique problems.

I love how this season is revealing to us how genuinely the wains acquire their most hilarious, irrational traits. Sarah is a relatively laid-back luftmensch, but Mary is smart and high-strung, and Erin and Orla follow their mothers’ lead pretty closely. It’s fortunate that this season appears to be delving deeper into such parallels.

They are display-only Kit Kats, which are not even a thing, but as Orla says, everyone has their price. Orla’s chaotic contributions to the backpack situation include eating the bag of potato chips, using £500 to buy the Kit Kats that Fra the food-trolley guy had earlier refused to sell them, and ultimately threatening Fra with the spinning toothbrush from the backpack. He strikes back in kind by waving a banana in the girls’ direction, and I am now in full laughter-tears over the ridiculousness of this pickle.

The fact that the wain think the intimidating-looking man who was seated next to them earlier is the owner of the rucksack makes them particularly anxious about getting the money back. During their first ridiculous confrontation with Fra the snack-trolley guy, he had walked off in a fit of (totally understandable) rage. They all thought it would be best if he never found out that he had accidentally taken James’s rucksack.

The mysterious woman settles herself for a more in-depth conversation up in the other train car. Although she keeps making references to “previous mistakes” and how she has “been away” for the past few years, Mary and Sarah are still unable to identify her. They continue to pretend to know and then talk themselves into a corner until they both say they are experiencing irritable bowel syndrome flare-ups in order to avoid being discovered. This is known as the sunk-cost fallacy.

The mystery woman’s identity is revealed during a game of Guess Who played with Gerry while Sarah and Mary are reorganizing and plotting one car over: She is their childhood neighbor Aideen, who has lost so much weight in prison that she is unrecognizable to the Quinns. I detest the way the show centers its whole plot around Aideen’s previous obesity. Weight is not a key story point! What would that be? Aideen’s crime and apparent redemption, of course! However, we scarcely mention that!

The bigger twist is that the rucksack actually belonged to Aideen; the intimidating-looking man is actually fairly amiable and was only watching over the bag for her. However, Aideen becomes enraged when she realizes someone has eaten the bag of chips, and the rest of the Quinns are treated to a front-row view as Aideen beats the backpack sitter who she accuses of stealing her wonderful, starchy, crunchy fried snack. So much for Aideen’s promise to improve her neighborhood, I suppose.

A technological malfunction leaves everyone stranded at the top of the roller coaster’s first drop in this episode, which is a particularly amusing one written by the show’s creator and writer Lisa McGee. They even believed that being stuck on the train was awful!