The 2024 Honda Prologue EV is a Stylish SUV Built on GM Frame. 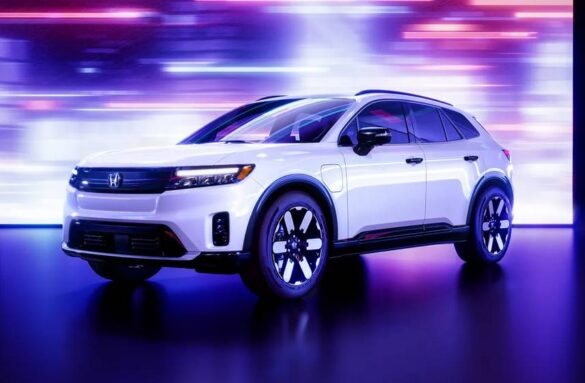 The Prologue was co-developed with General Motors and employs the same Ultium chassis and batteries as the Chevrolet Blazer EV. This is evident from its overall dimensions, although Honda is not yet ready to discuss the vehicle’s specifications. The Prologue’s 121.8-inch wheelbase is over a foot longer than that of the three-row Pilot. According to Honda, the Prologue is also 5 inches wider and 8 inches longer than the CR-V. The Prologue features a long, low, and broad profile with a rising beltline, a tapering roofline, and a sloped rear hatch, which gives it a sporty aspect.

Honda’s Los Angeles-based team of younger designers designed the Prologue, which has a really beautiful appearance with smooth surfaces and some unique features. The bluff front end boasts a black grille panel flanked by horizontal LED headlights, while the lower bumper has a big intake and an unusual bodywork depression directly below the grille. Glossy black cladding encompasses the wheel arches, side skirts, and lower bumper regions of the Prologue, which also features short overhangs and 21-inch wheels pushed to the corners. Instead of the traditional H emblem, the Prologue features the Honda name in a futuristic typeface, and the taillights are placed into another black panel.

The Prologue’s interior is the finest we’ve seen in a new Honda in the United States. The vehicle seen in these photographs appears to be a fully equipped Elite trim, with amenities such as ventilated seats. The Prologue appears to have updated infotainment software, as it features an 11-inch gauge cluster display and an 11.3-inch touchscreen, the latter of which features a visible physical volume knob. It features the same horizontal concept as previous new Hondas, with air vents that seem to reach across the whole dashboard, but unlike the Civic and CR-V, the Prologue lacks honeycomb trim. Although the Prologue has only two rows of seats, it appears that rear passengers will have ample headroom and legroom. The Blazer supplied the Prologue’s steering wheel and column stalks, door handles, window controls, and lock switches, but all other switchgear and interior features are Honda-specific.

The Prologue will be released in 2024, although its price is currently unknown. With the 2022 Pilot costing just under $40,000 and the Blazer EV beginning at about $45,000, the Prologue should be priced similarly. Honda asserts that the new CR-V hybrid will serve as a suitable stepping stone for clients who wish to move to EV ownership, offering shorter two-year leases in markets where the Prologue will be introduced initially. In 2026, the United States will witness the first EVs constructed in North America based on Honda’s e:Architecture, and in 2027, a new line of inexpensive EVs co-developed with GM and built in America will go on sale.